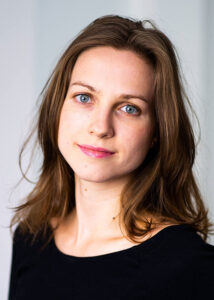 Maria has been trained in the Stanislavsky method, Lecoq Technique, Meisner Technique, Fusion Technique, and, Practical Aesthetics. She is a graduate of Mulholland Academy’s One Year Diploma Acting Program. Maria recently played a lead role in the American one-act classic, Lou Gehrig Did Not Die of Cancer at gogoHeart Film and Stage here in Amsterdam. In the last 12 months she also played the lead in Bobbi by Neil Labute at Polanen Theatre, and she performed a solo piece from Jane Wagner, via Search for Signs of Intelligent Life in the Universe at Lab111.

Maria just recently wrote and performed the solo piece PARIS at the CockPit theatre in London. While in London, Maria continued her actor training for 6 weeks of study with the UNSEEN act program.

Maria has a Master’s Degree of Business in Creative Industries. She is the Associate Director of gogoHeart Film and Stage in Amsterdam.