The Mulholland Acting and Film Academy is an English language acting studio in Amsterdam, founded in 2010.  The international program offers professional training, offering short and long-term classes mostly on evenings and weekends, allowing students to hold down a job and train outside office hours.

We offer well-rounded study providing training for the body, the voice, and the emotional life of the actor.

We expect our students to take their craft seriously. We work with pre-professionals  and professionals who want to train or keep training.

“Acting is the ability to live truthfully under imaginary circumstances.” Sanford Meisner

The late Sanford Meisner was an enormously influential acting teacher who taught at New York’s Neighborhood Playhouse for fifty years. One of the original members of the Group Theatre, he was part of a generation of American acting coaches who further developed the work of Russian director Constantin Stanislavski.

Sanford Meisner was co-founder of the Group Theatre, together with Lee Strasberg and Stella Adler. Meisner Training is an interdependent series of training exercises that build on one another. The more complex work supports a command of dramatic text. Students work on a series of progressively complex exercises to develop an ability to first improvise, then to access an emotional life, and finally to bring the spontaneity of improvisation and the richness of personal response to textual work. The technique is used to develop improvisation skills as well as “interpreting a script’, and creating the specific physical characteristics of each character the actor plays.

“Improvisation is at the heart of the

educational process and is sometimes confused with expression.  Yet a person expressing himself is not necessarily being creative.  The ideal, of course, would be for creation and expression to go hand in hand, in perfect harmony.  Unfortunately many people enjoy expressing themselves, ‘letting it all hang out’, and forgetting that they must not be the only ones to get pleasure from it: spectators must receive pleasure, too.

The critical comments one makes about the work do not attempt to distinguish the good from the bad, but rather to separate what is accurate and true from what is too long or too brief, what is interesting from what is not.  This might appear pretentious but the only thing that interests us is what is accurate and true: an artistic angle, an emotion, even a color combination.  All these aesthetic elements can be found in any durable work of art, independent of its historical dimension.  They can be sensed by anyone and an audience always knows perfectly well when something is accurate and true.  They may not know why, but it is up to us to know, because we are, after all, we are specialists. ” Jacques Lecoq. 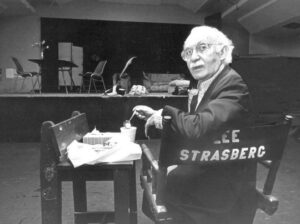 Technique focuses on the internal experiences and not on the expression through speech. It is grounded in the human truth of the moment. It helps actors to become emotionally free enough so that their body, mind, spirit, thoughts and speech are able to be combined in one full and true expression. To create real feelings and thoughts under imaginary circumstances.

They become actors with interesting behavior and imagination. It helps the actors to go beyond the writers words and intentions, so that they can elevate the material and make it their own, giving it their own color. It allows their impulses to surface, to have an inner life and subtext, to trust their instinct and to allow their silences.

The actors will learn how to interpret life in all its facets, so that their experiences can be called upon in the expression of art.

“Strasberg meant that what is called “Method Acting” is nothing new, but rather as old as Western Civilization itself. For centuries, cultures used different words and phrases to describe “good” acting: Romantic Acting, Emotional Acting, Divine Inspiration, The Muses, Feeling the Role. These terms merely described an organic process of creativity that talented actors used, often times unconsciously, to accomplish what audiences experienced as a moving performance. This was the (re)experiencing of life by the actor within the fiction of the story as if it were true and happening now. Aristotle said that the secret to moving the passions in others is to be moved oneself, and that moving oneself is made possible by bringing to the fore “visions” of experiences from life that are no longer present. Aristotle was stating the core principle of The Lee Strasberg Method™ — the creative play of the affective memory in the actor’s imagination as the foundation for (re)experiencing on stage.

This idea was first called the ‘System’ by Konstantin Stanislavsky, and later, as further developed by Lee Strasberg (at the Group Theatre, the Actors Studio and then at the Institute). The Lee Strasberg Method™ trains actors to use their imagination, senses and emotions to conceive of characters with unique and original behavior, creating performances grounded in the human truth of the moment.”