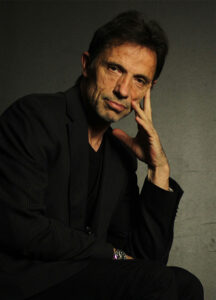 Alex has been performing for over 30 years. In live theatre performances, he has at times performed under the name Alex Ray June.

In 1984, Alex received a Bachelor of Arts from the University of South Florida in Tampa, Florida. Over the years in professional resident theaters, and in downtown New York, he has played numerous lead and supporting roles: Teddy, in WHEN YA COMIN BACK RED RIDER by Mark Medoff, Jed, in THE 5th OF JULY by Lanford Wilson, Bernie, in SEXUAL PERVERSITY IN CHICAGO by David Mamet, Geez, in SHAVED SPLITS by Sam Shepard, Bernardo in WEST SIDE STORY, Petruchio in TAMING OF THE SHREW, and Victor, in Jason Miller’s LOU GEHRIG DID NOT DIE OF CANCER. Alex was a founder and principle performer for 3 years in the improvisational theater group SCHOOL OF NIGHT, Tampa, Florida.

Alex performed with The New York Theatre Workshop led by EST’s longtime, distinguished, and beloved artistic director, Curt Dempster. Alex has appeared on American television in THE EQUALIZER, and has been featured on ALL MY CHILDREN, and ONE LIFE TO LIVE. He performed a lead role in the award winning-Athens Film Festival-short film, GUTS (a Charles Bukowski adaptation). In the early 1980’s he did a lead role in the wide release feature film, MADMAN (a bloodthirsty horror flick). From 1994 -1998 Alex lived and worked primarily in Eastern Europe. While there, in Warsaw, Poland, he produced and performed in Eric Bogosian’s hit one-man show, DRINKING IN AMERICA. Early in his stay Alex was cast in the prime-time TV series, SUKCES, which was filmed over the course of a year. He then went on to do a supporting role in the feature film AKWARIUM. Later he was cast in a lead role for a Jaroslaw Zamojda film, MLODE WILKI. This film became an unprecedented hit, which led to taking a lead role again in MLODE WILKI 1/2. Before returning to the US, Alex finished his final film in Poland with a role in celebrated director Juliusz Machulski’s comedy, KILER. This film went on to break all previous box office records in the Polish film history.

From 2008 to 2018, Alex has taught full-time in the Acting program at the International Academy of Film and Television, in Cebu Philippines-during his tenure, IAFT was voted by the Hollywood Reporter as one of the Top 10 Film Schools in the world (https://www.hollywoodreporter.com/news/best-film-schools-world-26870). Over the last several years Alex has been a guest teacher at Nord University with Teaterhøgskolen i Nord-Trøndelag in Norway, as well as a featured mentor at the &/Action Festival in Steinkjer, Norway, Film Acting Paris in Paris, LSPR in Jakarta, the Haukuna Academy in Antwerp, Belgium, faaam act school in Amsterdam, and Mulholland Academy in Amsterdam, Netherlands. Over the last several years, while teaching, Alex has done numerous short films. In 2013, Alex directed, produced, and played the lead role in the full-length play SEMINAR, in Cebu, Philippines. In 2017 he completed lead acting work on the short film RIVERSIDE, directed by Darwin Buschman and shot by Odie Flores(Kinatay, Serbis-Palme D’or nominees). In February, 2014, Alex was nominated for “Best Actor” at the Sinulog film festival in Cebu, Philippines for the short film PADULONG PINUY-ANAN.

In 2015 Alex began as the founder and Artistic Director for gogoHeart Film and Stage.

Alex grew up in a very small town in northeastern United States.